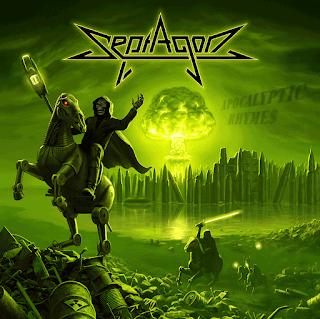 German power-thrash hybrid Septagon will release their sophomore album, “Apocalyptic Rhymes” on November 9 via Cruz Del Sur Music. The follow-up to 2016’s “Deadhead Syndicate” was recorded across a variety of studios with the band opting to produce the album themselves.


Songwriting for “Apocalyptic Rhymes” began shortly after SEPTAGON started playing shows in support of “Deadhead Syndicate”. The result, as guitarist Markus “Ulle” Ullrich (also of Lanfear and THEM) tells it, is a more focused and catchier album: “When the music for the debut was written, there was no band at all. This time, it was more of a collective work. Except for one track, I wrote all the music for the last album while our second guitarist Stef [Binnig-Gollub] now also brought in some ideas and songs. The production for the album took a bit longer than we expected, otherwise we would have released it sooner. But, we are very pleased with the results.”

SEPTAGON (who are rounded out by vocalist Markus Becker, bassist Alexander Palma and drummer Jürgen “General” Schrank) are arguably neither a true thrash nor power metal band, rather, a seamless blend of the two, whereupon punchy, but anthemic songs are born. With the powerful throat of Becker (also of ATLANTEAN KODEX) out front, SEPTAGON presents a fresh take on two of metal’s most familiar genres. According to Ullrich, SEPTAGON thrives off of this balance.

"When SEPTAGON started, I really wanted to keep it old-school with a nice mixture of speed and thrash and some U.S. vibes in the riffing", he says. "Markus is a singer with a very melodic voice and I always thought that this is a nice combination. Some songs musically are pure thrash, but since we listen to all kinds of music, it happens from time to time that we come up with some ideas that lead us into a different direction. On the one hand we want to keep our roots, but there's always room for some experiments."


Conceptually, “Apocalyptic Rhymes” presents a wide variety of topics, including literature (John Knittel’s “Via Mala” on lead single “Home, Sweet Hell”) while venturing into social commentary on “Make A Stand”, “Cosmic Outrage” and “The Weight Of The World”. However, given the current perilous nature of politics on an international scale, “P.O.T.U.S.A” is sure to raise some eyebrows.

Comments Ullrich: “It's obvious what ‘P.O.T.U.S.A.’ is about and simply because Markus lived in the U.S. for more than five years, it was something he just had to do. Some people will agree, some will probably say ‘Shut your mouth and mind your own business, you fuckin' Germans.’ I don't really care since it more and more became also ‘our’ business.”

Armed with a fresh batch of vertical, melodic and biting melodic metal, Ullrich and SEPTAGON are gearing up for another round of shows with an eye toward the future. “We’re going to take this step-by-step,” he concludes. “We want to play more shows, sell some albums and honestly, I can’t wait to write more songs for album number three.” 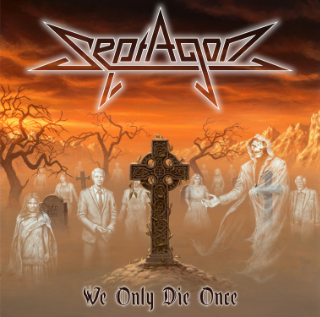